The meeting of the Ambassador of the Republic of Armenia H.E. Mr. Hrachya Poladyan with the Minister of Higher Education and Scientific Research of Egypt H.E. Mr. Khaled Abdel Ghaffar 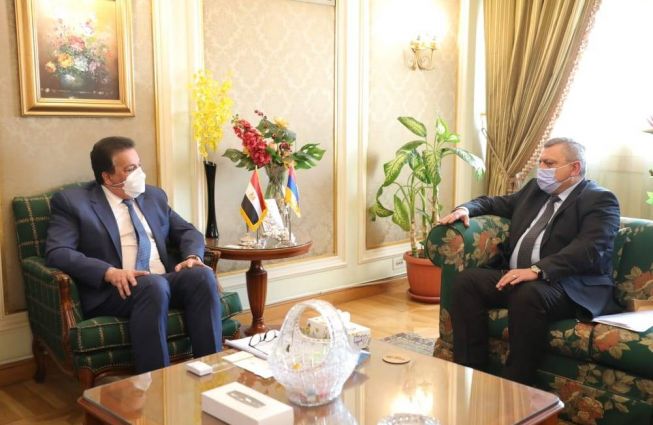 On February 8, the Ambassador of the Republic of Armenia to Egypt Hrachya Poladyan met with the Minister of Higher Education and Scientific Research of Egypt Khalid Abdel Ghaffar. The meeting was also attended by the Deputy Minister for Universities, Dr. Ayman Ashur.

Congratulating the Ambassador on his appointment, the Minister noted that Egypt is interested in developing relations with Armenia in the field of education, and his Excellency is personally ready to provide the necessary assistance in this matter.

During the conversation, the prospects and priorities of bilateral cooperation in the field of higher education were discussed. Both sides stressed the importance of the expansion of the legal framework and operation the Center for Armenian Studies at Cairo University. The possibility of developing student exchange programs between Armenian and Egyptian universities was elaborated. Ambassador Hrachya Poladyan emphasized that the desire for closer cooperation with Egyptian universities is observed among Armenian universities.

The interlocutors also touched upon the issue of mutual recognition of diplomas issued by Armenian and Egyptian higher education institutions. At the end of the conversation, the Ambassador and the Minister reached an agreement to support the development of the Armenian-Egyptian relations in the field of education due to the close cooperation.